If you read my State of my Arc post, you’ll notice that Prince of Thorns wasn’t on it.
It’s been on my wishlist for ages, but I didn’t actually own a copy.
Then hubby was on Book Depository buying LotR cards and asked “hey, what was that book you wanted by that bloke?”
And so here we are, with Prince Jorg having muscled his way to the top of my TBR list, the attention seeking little shit… 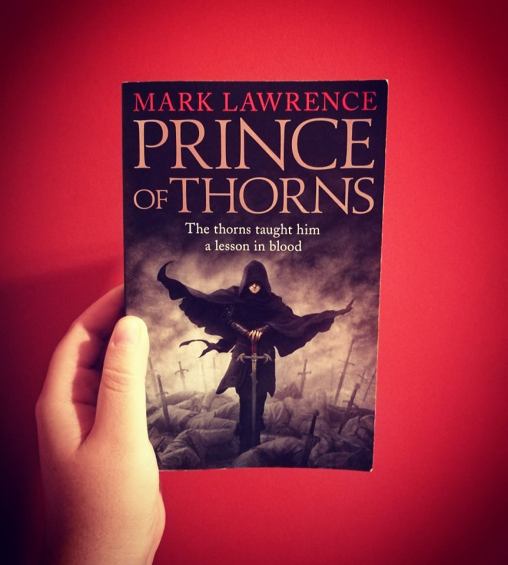 I also had an idea for a much snazzier shot, but it required my mother’s garden and dry weather, neither of which I have to hand this evening.

On the face of it, this is a fast paced story of revenge; an attempt is made on the life of the heir of Ancrath, he watches as his mother and younger brother are killed. And so he carves a torturous path towards those who rent this gaping wound within him.

I could not put this book down; it’s felt like it’s been a while since a book hooked me as much as this. I carried it around with me in case I’d have a chance to read it; it was addictive.

Fair warning, I think this is the most violent book I have ever read. It is not for the “faint hearted”, it features battles, dirty sword fights, references to rape, torture.

But if you enjoy passionate story telling, unexpected plot twists, and wonderfully clever and often poetic writing; then I would highly recommend this book.

Few among the brothers sought his counsel, men upon the road have little use for conscience, and although he never judged, the Nuban carried judgement with him

If you’d like to read Prince of Thorns you can find it here.

Why would anyone want to read a book with such violence? Because it is just a book. It doesn’t condone these things, it doesn’t glorify them. I’m not so naive to think the world is a peaceful place now, but the story echoes a time when atrocities were committed and we kind of glaze over that now. We picture knights as chivalrous gentlemen with codes of honour. We visit castles and medieval fairs and marvel at how strong they must have been to wear plate armour but gloss over the reasons why. And this fascinates me. I’m not sure what it says about me, but grimdark, and Prince of Thorns, answers a curiosity within me. Of what motivated and drove people and how power shifted.

Something I initially missed was the presence of any strong, or even positive, female representation. Barring Jorg’s mother, a murderous servant, and a radioactive child; any women were depicted merely in terms of their sexuality, and certainly not favourably.
This disappointed me at first, until I read the last chapter. Of Jorg writing out his story. And although the story had been from Jorg’s point of view all along, it hadn’t struck me until that point of the unreliability of our narrator. I began to wonder if the negative depictions of women mirrored Jorg’s grief for his mother, and the notion that no other woman would ever be as pure.
This has only mollified me slightly; there was a brief mention of a female pope but it would have been interesting to encounter a woman warrior. As I insinuated above, I love how this kind of fantasy draws from the medieval and history, and so I enjoy a book that recognises there were plenty of women fighting throughout our history too.

Jorg’s motivations were a driving force throughout the novel. Jorg does his best to convince us his pride clamours for revenge, and I think most of the time he believes this too; but I loved this particular passage, which was the first clue to the many layers at work in Lawrence’s tortured prince:

But in the night, before the dreams come, a voice whispers to me that it was fear that held me back, terror that rooted me in the briar, safe while I watched them die

This was my first hint that he’s motivated by something other than revenge. That he feels a sense of guilt or fault that he needs to make up for.
The quality of Lawrence’s writing was fantastic; the revelation that Corion was affecting Jorg’s decisions had me questioning, like Jorg, where he ended and Corion began. But by the end of the book, with this image in mind of Jorg writing out his own story, I began questioning which motivations were real and which Jorg would have us believe. I love a book that makes me question the validity of a character’s words. I felt there were parallels between Jorg and Jesus, most visibly his “resurrection” and his discovery by Katherine and Hanna; but he was a polarised version, embracing the darkness.

I feel Jorg’s character development was fantastic, very well crafted. But I missed any similar depth to any other characters. There was wonderful flavour text between chapters describing members of the brotherhood, but I’d have loved to have seen some of those in play;

Shakespeare had it that clothes maketh the man. The right clothes could take Brother Sim from a boy too young to shave to a man too old to be allowed to. He makes a fine girl also, though that was a dangerous business in road company and reserved for targets that just couldn’t be killed any other way. Young Sim is forgettable. When eh’s gone, I forget hos he looks. Sometimes I think of all my brothers it’s Sim that’s the most dangerous.

If you’ve gotten this far and felt comfortable that I haven’t given anything away spoiler-wise, I am definitely about to, so turn away.

Finally, lets talk about the Twist.
No, not Corion.
No, not the Count either.
No not… look, the set-in-the-future bit ok?

I loved this. I am heartbroken that it was spoilt for me before I read the book, but I only had the notion that it was set in the future, rather than in a completely fantasy/make believe land. Just how far in the future, and the nature of the circumstances, still came as a surprise however, and I loved it. My regular readers will know I love a dytopian; so the fact that this is a grimdark fantasy dystopia does blow my mind a little. Particularly the nature of the dystopia; this idea that society will regress and we’ll have forgotten our technological advances. A second “Dark Age”. I find it fascinating and terrifying and I felt Lawrence explored it well in this book, and I hope it is something that is explored much further in the next.

7 thoughts on “Prince of Thorns by Mark Lawrence”