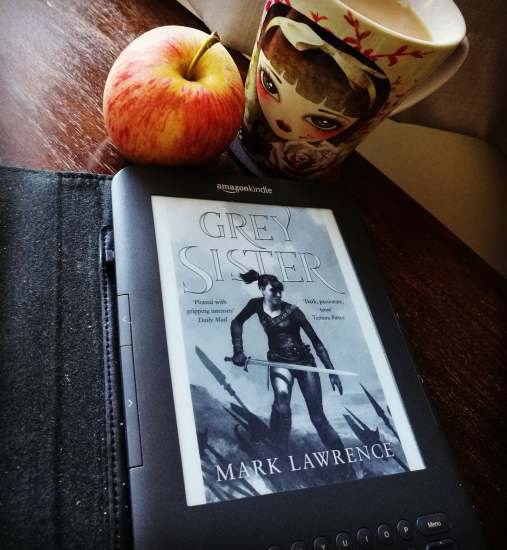 Grey Sister picks the story up right from Red Sister; there were a couple of threads in the last book left trailing to follow into the next, and I was very relieved to discover the fate of a certain nun I had been worried about by the end of Red Sister.

Similarly to when I read Red Sister (my review is here), I found the pace a gentle slow burner which built into a crescendo by the end. Having moved up from Red Class to Grey, Nona is faced with a whole set of new problems, whilst still trying to pursue certain unresolved conflicts from the previous book.

I’ve said it before and it’s something I’ll say again and again; Lawrence’s storytelling is masterful. Whereas Grey Sister is not a standalone novel and I would not recommend reading the books out of sync, neither is it your typical middle-book-crutch; Lawrence is able to provide satisfactory conclusions to some aspects from Red Sister, create a story with conflict that resolves within this book, whilst at the same time reveal more of the over-reaching story arc which pulls us into the third book. It sounds like a very complicated juggling act, but god it’s so smooth.

This time around we’re also treated to Abbess Glass’ point of view, and it’s safe to say she’s a character I had previously underestimated. Much like Lawrence himself, Glass creates layers in her scheming that are perfectly timed. She describes her planning like domino pieces, lined up for the fall; and it’s a perfect simile for Lawrence’s own plotting, events unfolding around us like a complicated pattern only revealed once each domino has fallen into its place.

Now more than ever she felt the irony that the Rock of Faith, named for the foundations of their religion, lay rotten with voids and secret ways, permeable and ever-changing.

Without running the risk of overly repeating myself when I review Lawrence’s books (world-building, characters, prose OH MY), his writing style is just so easy to fall into. There were instances where I felt a little confused or misplaced (namely, without hopefully giving too much away, the instances when she’s bound?), but on the whole Lawrence’s writing here is as immersive as ever, the high quality of character portrayal and progression, the perfect balance of descriptive prose which shows the reader what to see rather than dumps it all upon us. We have some intriguing new characters in Grey Sister who pose new problems for our Nona, and I found one in particular so amusing. I loved the play of its influence over Nona, very much like Freud’s Id, Ego and Superego, Nona has to find her path forward through these conflicting motivations.

I feel so deeply invested in these characters and their story; I’m dreading the wait for Holy Sister but I’ll relish the re-read. I feel this is a trilogy I’ll be coming back to again and again.

Grey Sister will be released in the UK on Thursday 17th May 2018.

It’s available from The Book Depository. This is an affiliate link and purchasing books through this link supports this blog.

In Mystic Class Nona Grey begins to learn the secrets of the universe. But so often even the deepest truths just make our choices harder. Before she leaves the Convent of Sweet Mercy Nona must choose her path and take the red of a Martial Sister, the grey of a Sister of Discretion, the blue of a Mystic Sister or the simple black of a Bride of the Ancestor and a life of prayer and service.

All that stands between her and these choices are the pride of a thwarted assassin, the ambition of a would-be empress wielding the Inquisition like a blade, and the vengeance of the empire’s richest lord.

As the world narrows around her, and her enemies attack her through the system she has sworn to, Nona must find her own path despite the competing pull of friendship, revenge, ambition, and loyalty.

And in all this only one thing is certain.
.
There will be blood.