I’m going to do something a bit different this time around. I’ve decided I’m not going to appoint a star rating to this book, as I can’t say I particularly enjoyed it, but I want to review and discuss why I feel it didn’t work for me. 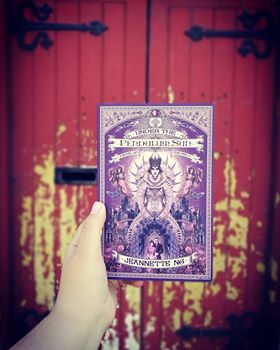 Catherine Helstone’s missionary brother, Laon, has disappeared while bringing the Gospels to the Dark Continent – not Africa, but Arcadia, legendary land of the magical fae.
Desperate for news of him, she makes the perilous journey to that extraordinary land, but once there, she finds herself alone and isolated in the sinister house of Gethsemane. At last there comes news: her beloved brother is riding to be reunited with her – but the Queen of the Fae and her insane court are hard on his heels.

I was very much looking forward to this book; I love the Brontes and this sounded like some kind of Bronte/Jonathan Strange & Mr Norrell cross-over: I couldn’t wait to dive in.

I loved the opening of the book, I immediately fell in love with the prose. Beautiful, rich, poetic, full of hidden meaning; Ng’s use of language and description is gorgeous:

“I recognised the leering profile of a hill, the knuckle-like crest of a mountain. Yet as wind and wave shifted the shapes, it all seemed different again and my strained eyes watered.”

Coupled with this rich prose is an incredibly vast imagination; the scope of what Ng was able to conjure was staggering. The idea of the eponymous pendulum sun, the fish moon, the fae themselves. It was all beyond anything I’d read before, a wonderfully dark fairy tale pushing against the limits of imagination. Ng’s writing style has almost a dreamlike/nightmarish feel to it at times, perfectly in-keeping with the idea of being in the land of the fae.

But after a while, it all became so overwhelming. I began to feel like the protagonist Cathy: stifled within this constructed world. This may well have been Ng’s (very clever) intention, but I found it just took too much out of me.

Unfortunately, there were other aspects that similarly wore me down. By the third part, I had stopped reading the epigraphs at the start of each chapter; I found many of them quite convoluted and by the time I’d finished it I’d be disorientated from the main story. I could argue this was an effective means of adding to the dreamlike aspect of the book, but I disliked that feeling of grasping to remember the dream at the start of each chapter. Furthermore, although being well aware this is a story about missionaries, I (perhaps stupidly) wasn’t prepared for the sheer volume of theology within the book.

Despite this, I cannot say it is a bad book. It’s fantastically written, very clever and intelligently researched. I absolutely loved the many references in it, not only references to the Brontes which I was expecting. The book is imbued with secrets and mysteries, which was at times exciting; at times frustrating as I didn’t always feel like I was keeping up with the twists and turns and subtle hints, the veiled conversations. And yet speaking of secrets, I absolutely loved the vulnerability inherent in this line;

“Secrets have a way of making me feel lonely.”

In short, this is a rich, deliciously filling book which deserves to be slowly savoured. Unfortunately, it just wasn’t for me.

10 thoughts on “Book Review: Under The Pendulum Sun by Jeannette Ng”