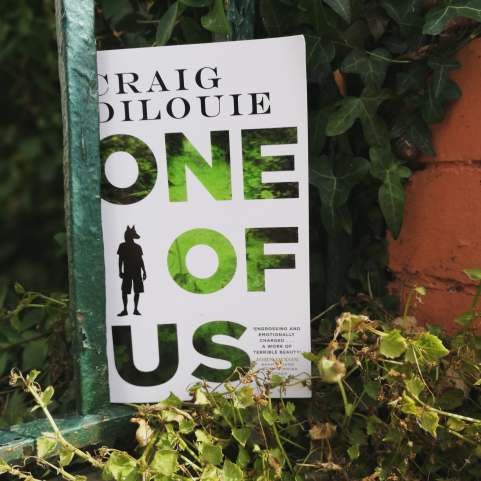 Set in the ’80s, in the deep south of the United States of America, One of Us features a world in which teenagers born with a genetic mutation are kept separate from society in “homes”. We follow a cast of very different characters as tensions between “the creepers” and “the normals” hit boiling point.

I’m trying hard to assemble my opinions into some kind of cohesion so I can give this book the review it deserves… but I desperately want to gush and squeal and make demands that you read this book right now.

Rein it in Beth, you can do this.

This book was so incredibly thought provoking; its core theme was this idea of “us” and “them”, the fear this stimulates in the ignorant and the things this in turn can lead on to. The ripples into other issues left me reeling; this book tackles dehumanisation, abuse, race, sexuality, religion, politics, philosophy…

And yet, it’s not just All About The Message. I didn’t feel like I was wading through sociological hypotheses and drowning in a moralistic flood; DiLouie wove all these fantastic messages and ideas into a story that is addictive, and wrenching, and so utterly readable.

“I don’t want things to be bad for them,” Amy said “I really don’t. I just don’t want them around me. Why does that make me a bad person?”

There were moments throughout the book where I just had to stop and take a breather; whether it was from the profundity, or out of fear for a character. It left me frustrated and raging about the truth of the world we live in. It may be set thirty years ago (yes, the ’80s were thirty years ago, I am just as upset about this as you) but it is (depressingly) so relevant to our society today. And not just American society; I could also hear the voices of Brexiteers demanding to have our country back.

The characters have broken my heart a little bit. Some of them were absolute arseholes, but some of them were beautiful in their innocence. Innocence that gets betrayed, or manipulated, or evolves and twists the character into the thing they never wanted to become.

This is such an important book. But it’s also an enjoyable and an emotionally charged book. I’ll be keeping a close eye on DiLouie, I can’t wait to see where he goes from here.

6 thoughts on “Book Review: One of Us by Craig DiLouie”