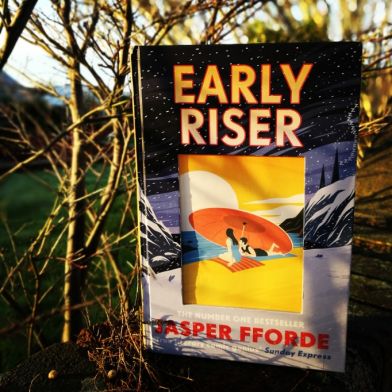 I have long been a fan of Fforde’s books, but I have never actually reviewed one before and I’m at a loss as to where to begin. How do you describe a Jasper Fforde book? You can’t do that comparison thing of “If you like so-and-so then you’ll love this” because, as far as I’m aware, there isn’t anything else like this. He is a style and a genre unto himself.

I’m not making this picture any clearer, am I?

The biggest thing that stands out for me, in any Fforde book, is the sheer scope of imagination. I know, when I pick up one of his books, that I am about to read something utterly unique; and yet the eccentric and extraordinary and especial will be housed within something familiar. The framework is familiar, and cosy, and safe. The childhood holidays on Rhossili beach, Tunnock’s teacakes, unreliable rail travel, Rodgers and Hammerstein, stamp collecting… All in a world where humans have always hibernated, have winter coats (that even come in tortoiseshell); where dreaming is shunned, there are get-fat-quick fad diets, and your boss will punch you in the eye if you lie to her.
Where people can be stolen away in the snow on the laugh of a child, only their clothes left behind, neatly folded…

Your name is Charlie Worthing and it’s your first season with the Winter Consuls, the committed but mildly unhinged group of misfits who are responsible for ensuring the hibernatory safe passage of the sleeping masses.

You are investigating an outbreak of viral dreams which you dismiss as nonsense; nothing more than a quirky artefact borne of the sleeping mind.

When the dreams start to kill people, it’s unsettling.

When you get the dreams too, it’s weird.

When they start to come true, you begin to doubt your sanity.

But teasing truth from Winter is never easy: You have to avoid the Villains and their penchant for murder, kidnapping and stamp collecting, ensure you aren’t eaten by Nightwalkers whose thirst for human flesh can only be satisfied by comfort food, and sidestep the increasingly less-than-mythical WinterVolk.

But so long as you remember to wrap up warmly, you’ll be fine.

I have a tendency not to read blurbs, so I went into this book not fully knowing what to expect in terms of plot – and it’s a plot that creeps up on you without you realising. The pace is reasonable to start with, but before you know it events have escalated in what reads like a perfectly natural manner to the point where you’re in the thick of it and you can’t put the damn thing down. It builds from a whimsical “what if” story into an exciting, conspiracy-riddled (yet somehow still whimsical) twister of a story.

As ever, I don’t want to talk too much about the plot for fear of giving anything away for you, but when you look past the quirks of the story there are some fascinating themes running through it; on humanity, how we treat each other and whether or not we get what we deserve. Themes of Us and Them, Class Struggle and Community. Of Corporate Greed and The Greater Good.

And talking of quirks, there are plenty, but one thing struck me in particular. It’s a book set in Wales and written in English, and my automatic assumption was that everything was happening in English. So when I read this on page two-hundred-and-something, I was momentarily floored:

“You speak English?” he asked, because I’d paused. “The tongue of a civilised race?”
“We don’t speak it much out this way,” I replied, thinking carefully as I hadn’t used my English for a while and was a little rusty. “I thought we were at peace, you and we?”

This is the kind of subtle interweaving you can expect from Fforde. Of course they speak Welsh in this Wales that has never been subjugated; but what I especially loved was Fforde’s recognition that he doesn’t need to waste time telling you this. He feeds you background information like a mother hiding veg in her child’s pasta sauce. It’s there. You just don’t know it’s there until you suddenly find a piece of carrot that hasn’t been chopped small enough… His writing style is clever, fantastically witty, and best of all – respects his readers.

It’s so wonderful to return to an author whose book you just know you’re going to love. Early Riser did not disappoint, and now I’m eagerly awaiting whatever adventure Fforde takes us on next.
Put quite simply: Jasper writes good books.